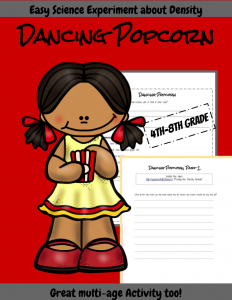 Density can be an abstract concept to students.
This simple and interactive experiment demonstrates density in a fun and unexpected way.

At the surface, the carbon dioxide bubbles burst and the volume is reduced again. The kernels and craisins sink because they become more dense than the soda.